What do Television Viewing, Hypertension, Fibromyalgia and Opioid Addiction have in Common? 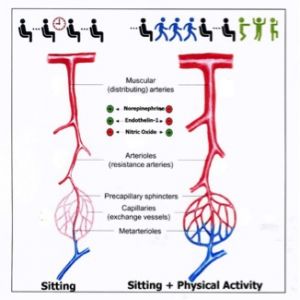 In healthy, pain-free populations, a single bout of aerobic or resistance exercise typically leads to exercise induced hypoalgesia (EIH), a generalized reduction in pain and pain sensitivity that occurs during exercise and for some time afterwards. But it may be unchanged or, in some cases, even increased in response to exercise. (Rice et al Exercise induced hypoalgesia in pain-free and chronic pain population, J Pain 2019). In contrast, central and peripheral nervous system NO from eNOS and nNOS produce more consistent pain relief. NOSs most likely inhibit norepinephrine-induced pain and stiffness due to vasoconstriction produced by television viewing, hypertension, fibromyalgia osteoarthritis and opioid addiction.